Shaw University students in 1913 preparing to make the world happen. Still are.

In the beginning was an idea; “I’ll give it all away,” said God. And so, from that first micro-nano of time until this latest Carolina Spring, we’ve been part of an explosive, incomprehensive generosity. God could have done it more like we’d do it: try out life on just a small little solar system with less than a dozen planets; maybe just a few kinds of people who all look just alike. We’d have stopped evolution with the golden retrievers just to keep things polite and tame. Not the God of this place! Life scattered everywhere!

The scale and energy of the giving is entirely beyond measure, but since it is happening even on our little planet out on the edge of smallish garden-sized galaxy, it is not beyond our sight.

I wonder why we don’t notice it more?

And in this hard-hearted time, I wonder why we fall for the scarcity scam nearly every time. Every little despot and predictable tyrant says the same dumb thing: “There’s not enough to go around! We must huddle together against………them! If there isn’t a ‘them,’ they just shout louder hoping we won’t notice that the them-of-the-month looks just like part of us. The immigrants! (Except for a relative handful of First People every damn one of us immigrated here.) ‘They’re poor!’” (Says rich people who haven’t broken a sweat in three generations.)

Meanwhile everything keeps expanding in a riot of new varieties of generosity.  No matter how tightly the rich hold on, the rest of the planet seems to be inclined to kindness. You’d think we’d notice.

Maybe it would help if we renamed the whole thing from universe (it is most certainly NOT uniform) to geniverse. The whole thing is generative, from the first. Just look and see.

You don’t have to be an astrophysicist to see generosity breaking out everywhere, constantly. This week started with another couple dozen of people at our “Learning Forum.” This is a kind of practical potlatch in which we at Wake Forest Baptist provide the pot and brilliant folks from Texas, West Virginia, New Jersey, Virginia and both Carolinas share the ingredients of their version of FaithHealth. None of them are the same; but you can see the common thread—organized generosity. We call it “proactive mercy” here and are bold enough to show the data that indicate that pretty much the only way you can expect the cost of charity care to go down is to be more proactive and smart at giving things away (so people don’t wait to go to the emergency room)(duh).

This is so obvious that it shouldn’t even qualify as smart. But in a hard-hearted time, simple generosity passes for bold brilliance. I suspect the same principle would work in pretty much the same way on any of the billion billion planets God keeps flinging so shamelessly into the darkness. Just because it is obvious, that doesn’t mean it happens without some group of humans making it happen in their particular part of the galaxy, such as Waco, downtown Dallas or Huntington. You still have to organize your work around the principle of proactive mercy and then do that work well.

One of the FaithHealth Gaston volunteers volunteering to take a picture of the other volunteers. There is no end to the generativity!

A couple days later, we were at Caromont Healthcare in Gaston County, a bit east of Charlotte. This is tough working class country where lots of people have callouses and no small sense of trauma from all the missing mills. It was a volunteer breakfast celebrating the arts, crafts –and outcomes—of one of the most well-organized community-based tapestries of generous care anywhere in the nation. It’s called FaithHealthGaston, but the names that mattered most were those of the heroes and heroines. One volunteer wept as he shared the story of a woman trying to cook by the light of the tiny light in her microwave. What kind of a man would not weep—and then fix kitchen lights?

Kevin Best is a NC Classic; a skilled craftsman, sharing “Did you notice the pavilion over by the Lutheran Church?  That was the last job I worked on before I fell ill.”  He’s fallen on times that would leave my spirit crumpled and bitter. But the volunteers connected him –and crafted those connections well—so that he’s now on disability, getting his meds, giving him a chance to be alive in the lives of his grandchildren.  A story the the universe likes to see.

Volunteers are not gullible or too dumb to know about money. They know the secret that god shared from the first moment of creation: life cannot be held, much less bought or sold–it lives as it is given, it lives by way of giving away. The mystery, if there is one, is that there is always more to give, the miserly fear of scarcity is utterly and always mocked by the economy of God that creates quicker than we can give. the right side up universe created by a god who loves surprise who mocks the darkness with the light of grace. give it away, god says, and I will replenish; give it away and there will always be more, give it away and you will find it.

What you see in Gastonia is that if you want a healing organization in the heart of a city and region that so desperately needs healing, hope, wholeness, you need to find a way to be in covenant, in partnership closer that words and longer than one life who know that secret — give it away for free. This is not a new idea that only occurred after the Fall, after the bullets and whip and the shackle. No. From the very first, god’s first and last idea and again this and every morning, is that life is for free and will not run out. So give it away. 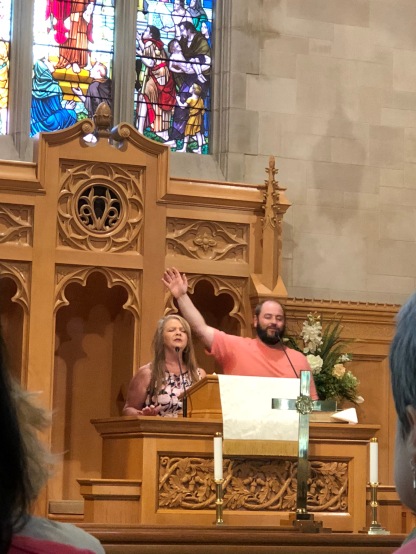 The next morning Connectors from other such communities gathered in the jewell-like Davis Chapel of Baptist hospital for worship, not lecture or instruction. The Refuge Mission from Surry County brought the music of praise, while Rev. Dr. Anthony Jones managed to squeeze Baptist fire and thunder into a hospital-sized serving of the story of the woman healed by the touch of Jesus rags (he was too poor for anything else, Anthony noted).

The universe said amen. Of course, it did.

Saturday was the most remarkable bubbling stew of hope where hope has been served up for 153 years on the campus at Shaw University. Shaw was built to raise up prophetic pastors of power to let justice roll and intelligence to lay out the plumbing. Every generation has had to catch fire again, find it’s courage and speak truth first to each other and then to the ever-hostile powers of the world around. Shaw sits a short stroll from where the NC Legislature meets; as dumb and mean-spirited a gaggle on any planet within many light years.

Shaw is never surprised by the mean and the dumb. But it is surprised at how hard it is to channel some of the super abundance in the world into the cash reserves of this, the very first of the great Black colleges in the South, the very first four-year medical school anywhere (Harvard copied it in a few years). If the world built for expansive generosity, why is it so hard to find money? It turns out that the hard part is remembering what the money is for; not the bricks or the stuff it buys. There is no gap in listing what. The key is the why it matters.

Once you remember the why, you still have to do the work of communicating it in clean, sharp language. You have to get everybody’s name spelled correctly on the mailing lists. You have to hire somebody to plug in the computer and make a decent brochure. But your work is all illuminated by the why; and it helps if that why is aligned with the universe—the geniverse.

Saturday night we were blessed as guests of the astonishing Isasi family at a thundering gala for  SECCA in Winston-Salem, held in the old Hanes family mansion. Once a pillar of the old Southern way, on this night, it was a festival celebrating Cuban art and culture—and what it has meant to the new southern reality. Jose Isasi has been in Winston-Salem for 43 years, now joined by his three sisters. The feast was no regular fried chicken; no, it was Isasi family recipes! He’s the publisher of Que Pasa, the Spanish Language newspaper published in the major cities of North Carolina, a large part of the reason our hospital has been drawn so deeply into the life, work and future of the Hispanic community.

In the geniverse, the energy and all that matters will always find its way toward what wants to happen next. That’s why they are called generations. The one and only key is to align one’s work—all of it, every bit—with the logic of the ever-creating, ever generous Spirit. When you look like that because you are like that, everything flows, just as it does in other billions of billions of planets like ours. That’s how it works.

It hard to remember that when the mean and the dumb are thumping their hollow chests with the teeny weeny little hearts. Let them preen; they are already being left behind as the rest of the generous planet goes on weaving a stronger and more vital “us”  out of all the broken threads.