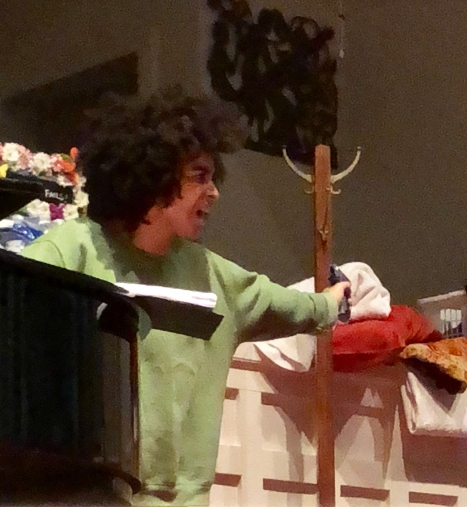 Melissa Jones, Actress, embodies the words and pathos of Natural Shocks as only a professional–and a woman–could.

“As birds flying he scattereth the snow, and the falling down thereof is as the lighting of grasshoppers. The eye marvelleth at the beauty of the whiteness thereof, and the heart is astonished at the raining of it.”

The word “astonishing” bounced around web last week in connection to the staged readings of Natural Shocks, the, well, astonishing, play by Lauren Gunderson. It is about guns wielded by those we tried to love, about fear and terrible choices by love splattered across years and precious moments. It’s a tornado of a play on every level touching down in 104 theaters from Orlando to Marin to New York (www.naturalshocks.org).

The picture above is of the….astonishing….embodied reading offered to 150 stunned members of the audience in our Green Street Methodist Church in Winston-Salem, NC. From the tears and gasps during the reading, you could feel it lance old wounds and release deeply held sorrow in the only way humans ever do—in the presence of others who know, love, fear and hope together. My daughter–Lauren–was my sister (and teacher)  in the work of healing.

The language of Natural Shocks ranges from raw to brilliant to metaphorical and back again, subtly erasing any distance between actress and audience; all of us drawn in closer to each other. 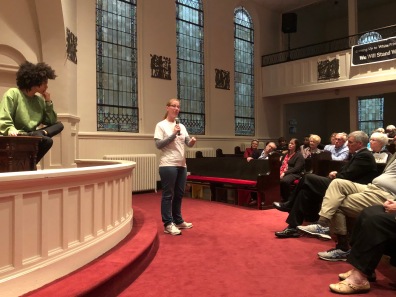 Jenny Marshall, mom, teacher and candidate for US Congress, speaks of her experience with guns as Melissa Jones looks on. Green Street United Methodist Church, April 20, 2018

Today a dozen of us were back in the same space. The morning light blew through the windows like a Turner painting. But there were no famous people (other than Jesus, I suppose). Kelly gave a a quietly brilliant sermon about a scripture we all have heard (about love from Corinthians 13). We shared some torn pieces of bread and drank juice from a pottery chalice.

Nothing spectacular; just the kind of astonishment that Sirach had in mind; the kind you have to present to in order for it to work its mundane power.

Robert Farrar Capon’s book, The Astonished Heart speaks to both kinds of wonder, that offered up by Lauren and Kelly, by Melissa and Maria Jones (actress and her pastor Mother). “Most of the preaching I hear in the contemporary church is so bereft of … astonishment—so shriveled down to platitudes about life enhancement and moral uplift, so vapidly “spiritual”, to un-earthy, so unlike Jesus whose words leap like grasshoppers and devour like fire—that its too tame to raise even a single hair.”

He continues, “We are in a war between dullness and astonishment. Not between conservative and liberal, not between peasant and intellectual—and, above all, not between believer and non-believer.”

Capon died in 2013 at 87. His obituary in the New York Times noted that he dismissed most forms of conspicuous religious piety, construed the Gospels as a radical manifesto for freedom, and for better or worse championed what he called “the astonishing oddness of the world.”

Many of us gathered in the 104 places made sacred by authentic language washed in the shared pathos of angry lament came near despair of rolling back the weird strutting power of the NRA: an hour’s worth of true words in the avalanche of cynically manipulated Big Data.

Big data can predict but not astonish. It can tell us what is likely, but not what is possible. In the dulling hands of a rented cynic, data can blow fog into the most obvious things (women should not be afraid of being shot by their husbands; children should not have to practice hiding under their desks from automatic weapons).  Of course, you don’t need the internet to stampede people into the fog of fear; you can do it with crackling AM radio, just ask the Rwandans, killed by their neighbors. Worry about it the electronic power. But don’t fear it.

Love drives out fear just as light makes darkness impossible just as hope rolls away despair. The thing about love, light and hope is that they are social; they emerge and exist only where people connect to each other. Only whether we touch, make eye contact, move from autonomy to solidarity and move again to release our newfound common energy into action.

Raising political will is as mundane as the falling snow, which, Sirach says, “the heart is astonished at its raining.” Actual political organizing is dull as old snow, more like the department of motor vehicles than storming the Bastille. It is sometimes goofy, occasionally silly. Slow.

But if you know what you’re witnessing, there is nothing more amazing to watch is the actual movement among the people. 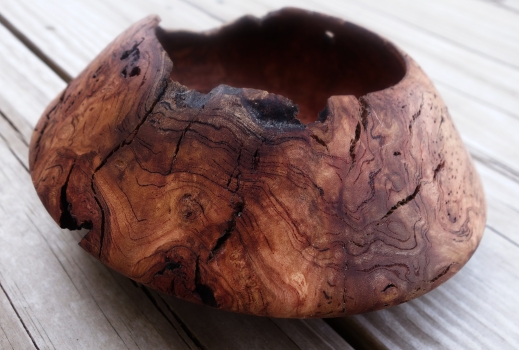 North Carolina Cherry Burl natural edge bowl. I turned this after letting it season for two years and was simply astonished by the grain and complexity within. You can find this one on my “druiddelight” site.

Up close to the process you can see the moving people like you can see the grain and drift of the flakes in the falling snow. It reminds me of the silent wonder in the grain of the cherry burl I found up in the high country mountains west of here nearly two years ago. It has aged in the corner of our garage, mysterious, waiting to be opened up for its second life. The band saw whined and I felt like Sirach as the split apple left me astonished with the wonder of its beauty. It isn’t pretty, actually. But it is  astonishing. (You can buy that cherry burl Bowl, with the money going to March for our Lives here )

Natural Shocks raised money, as well as energy ($1,643 just in our little gathering). Jenny Marshall, a mom and teacher, is running for Congress in an intractably locked-in seat. She spoke of her experience with guns, which involved taking a service revolver from a distraught officer threatening his family. She left the gathering with a bit more energy for another day of campaigning. We registered a handful of people who hadn’t gotten around to it, yet. Maybe the spirit will burn all the way till November.

No big deal; but way bigger than Big Data. What matters most is what counts.