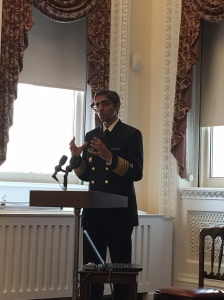 The Surgeon General of the United States explains why his four biggest opportunities to advance health need relational infrastructure built on faith and community partners.

On Wednesday and Thursday this week, a wildly diverse group of leaders met in the White House to explore how to accelerate the growing alignment so necessary to advancing health and well-being of communities. Surgeon General Murthy laid the foundation with a sketch of a framework he will unwrap later this week in detail. But you could guess the outlines, which are pretty much the same priorities John Wesley laid out in his book, Primitive Physic, years ago, written before germs were invented. The reason this is new today is not because we have a new machine, but because have the possibility of new relationships of high capacity, capable of operating at scale. Keep saying that: building capacities for scale. They require what is now possible; rich interconnection between systems for food, mobility, the more complex systems of legal and illegal substances and the almost infinite array of systems relevant to emotional and mental balance. Oh my!

The challenge is the opposite of what you’d think: too many partners, not too few. 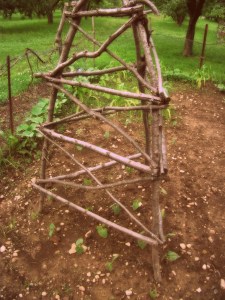 A trellis fits the plant it is intended to help find the light. Plants just need old sticks.

Tom Peterson tells me there are at least five million non-profit organizations in the world today, most of them created in the last half century, and almost every single one formed to do something somebody thinks useful for improving their community. It’s worse than that! Many more millions of for-profit companies have been formed in this same time, hoping to make money, but also to do something good in the process. Just check out kickstarter.com to get an idea. The ecology of human forms of association is rich, complex, interconnected and adapting at the speed of electrons. This is terrific if you need lots and lots of relationships. It is daunting if you think someone should be in charge of organizing them.

The Surgeon General does not aspire to organize 5 million of anything. But he does hope they (we) can organize ourselves in ways that can make it more likely that 21st century science (including, but far beyond everything Wesley knew about) can get into the lives of people and neighborhoods. 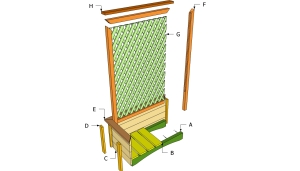 Many trellis builders think a lot more about their wooden art than they do about the plants.

One idea that has been popular, but rarely successful, is forming a backbone organization to achieve “collective impact.” I think it’s the wrong body part for the job, preferring something more like the intelligence of the liver or gut. But it is often useful for relatively small problems with simple answers, such as building a lot of homes in a particular city. When used for big and complex challenges, the backbone is often overwhelmed by all the partners and ends up simplifying things by leaving new ones out. The backbone’s limited number of vertebrae is the same list of privileged partners that always end up around the table. The idea of a table at which things are decided is part of the problem: you can’t fit 5 million people around any table.

On Thursday we tried on a different mental model better suited for organic complexity: the trellis. A trellis is not a miracle; it’s just useful to support the miracles of photosynthesis so that plants do what they want to do—bear fruit. The gardener (and the movement organizer) trusts the process, but doesn’t make the process do all the work. I like wine, and know that good wine needs just the right soil (developed over many thousands of years) and just the right rain (which depends on picking just the right valley and sun, not too hot and not too cold), so that magic happens. But it helps if the vines don’t just run every which way on the ground, so they have developed a near science of trellis design to fit different grapes. 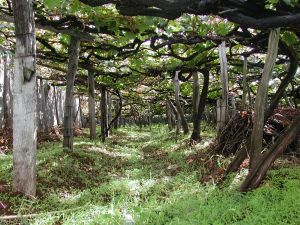 Some trellis are built for the decades the vines mature through.

A movement is more complicated than grapes—and right now we have vines running every which way. It would help if we did the humble work of building some trellis on which could grow a rich array of relationships to bear the fruit the Surgeon General imagines possible. There are four main kinds of trellises: 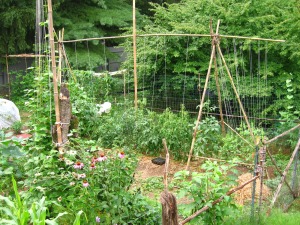 Some plants (like some types of congregations)(yours, Michael Minor!) are so smart they can grow up a string. But the string still needs some support.

Michael Minor is the midwife of the National Baptist Convention’s 60,000 congregations move toward health; but every one of them has its own Board of Deacons that will need to catch the same wind of the Spirit. So, too, the 33,000 United Methodist churches, hundreds of Jewish Community Centers and dozens of faith-based hospitals. “Can dry bones live?” asked Ezekiel. Can an old trellis bear new fruit? 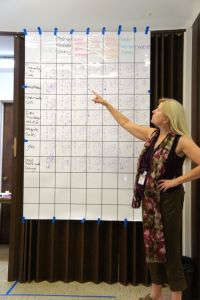 Community Health Assets Mapping, here led by Teresa Cutts, makes visible the assets already alive in a place–the stuff that wants to grow. This enables the community leaders to imagine a new kind of trellis of relationships. And then they can build it.

We watched the video of the murmuration of the starlings, a mesmerizing image of complex beauty (here). Are we like starlings? They dance in the sky forming patterns beyond words. But they are all starlings and know how to act with each other. We are not alike (Kirsten Peachey said the group is more like a dozen starlings, and a hawk that eats starlings, and a horse, pig and potato). Not as pretty in motion. Or maybe it just takes time to find our common energy. The International Science Times, reflecting on the video, says that the way the birds dance is managed “by constantly avoiding collision. Generally, they were taking their lead from the bird directly in front of and below them, rather than the birds to the sides or above.” If you can’t understand how that metaphor applies to humans, you have never tried to lead a committee.

And we watched a YouTube video about how reintroducing the wolves in Yellowstone are changing not just the wildlife, but birds, berries, beavers and the flow of the rivers—the whole ecology (watch it here). Maybe we can change more than we think! So we howled (literally, we howled, which may be the first time that’s happened in White House since Andrew Jackson let in the rabble from the streets!). 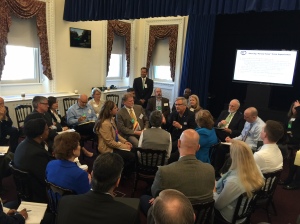 Arvind Singhal used his many creative meeting structures to unleash a torrent of transparent brilliance. This is the “fishbowl” with healthcare providers in the middle. Pretty smart, but the questions from the outside were the real brilliance.

Or maybe we are just human grown-ups influencing our own complex systems as we try to live our way into the new possibilities. Many of us this week find our story in the Great Story of faith; we think we are agents of a redemptive process that has never quit, despite entire centuries of bleak reversal. We think that God is not quite done with our tiny planet or even with us, flawed and tiny people.

As we were meeting, astronomers were reporting more evidence that the ingredients for life are astonishingly abundant in places beyond counting at distances beyond imagination. The vast reaches of reality are swirling with the ingredients of life. The places once imagined as impossibly cold and hostile are just waiting for the right relationships to emerge. “Life finds a way,” said Jonas Salk, who was one of the first who thought that life rode into Earth on the comets.

Life is still finding a way—even in the hostile barrenness of Washington DC. It turns out there is a richer array of the basic ingredients than we’d been led to expect. But don’t make the process do all the work, unless you have a few million years worth of patience to move at the speed of stars.

I turn 64 Monday and need to pick up the pace a bit. It is very good news that we don’t need to invent the life. But we do have to thoughtfully craft the trellis. Let’s get on with it.