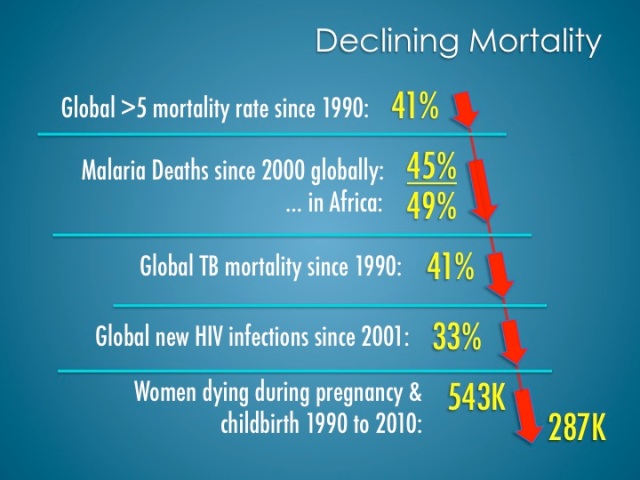 Dr. Christoph Benn knows the face of suffering up close. He was a physician practicing in Tanzania at the beginning of what became known as the AIDS pandemic. Driven by the quiet power of faith he did not blink at the reality. One thing led to another and he is now serving as Director of External Relations and Partnerships at the Global Fund to fight AIDS, Tuberculosis and Malaria. He is now not blinking at another reality: by the most profoundly obvious measures, of peace and health the world is ….. improving….a lot. What is the faithful response to that reality? Silence, mostly.

Since 1990 death rates from disease and violence have nearly dropped in half.

Repeat: Death rates from disease and violence have nearly dropped in half since 1990.

What has been going on is a striking blend of technology and social/political mobilization involving public, private and hybrid organizations that have mobilized tens of billions of dollars in quite novel ways. At the base in every country these efforts almost always involve religious networks and organizations. But to a striking degree religious leaders have hardly known what to say. So for the most part they—we—say the same thing we said 50 years ago when we faced a post-colonial world with highly concentrated medical assets and vast impossible demand for basic primary care. And 100 years before then when germs were beginning to be noticed and we could finally do more than lament. And 1,000 years before then when the world was almost entirely unpredictable except that most lives were short, brutish and painful. This is, Dr. Benn suggests, intellectually and theologically irresponsible.

We faithful took Jesus’ throw-away comment “the poor you will always have with you” as if he was describing a universal constant like gravity, instead of a cheerful footnote on why it is was—and is—okay to celebrate the gifts of friendship and fellowship with occasional extravagance (look it up:  Matthew 26:11).

Do you think Jesus or any religious leader would give a license for mere symbolism toward the poor? Not in a world capable of changing in quite fundamental ways. We need not be satisfied with symbols. We can be accountable—deeply—for bending the arc of justice as far as it will bend in our span of years. And it can bend a lot further and quicker than we thought. We can do this thing called justice to the point where the injustices are the outliers, not the norm. 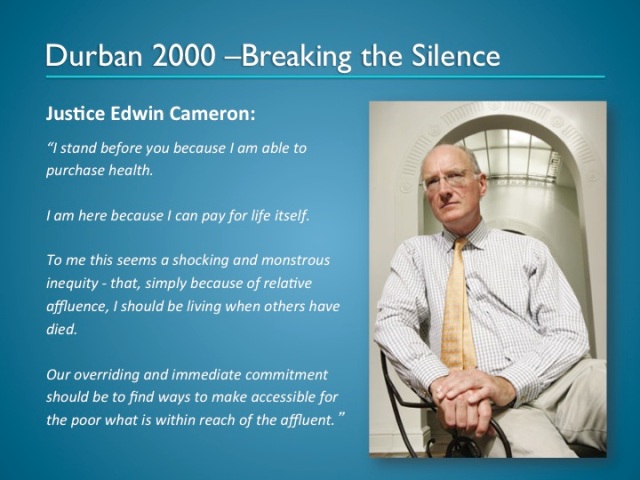 This is almost as inconvenient a truth as the melting icecaps, which, of course, could signal an even more radical and ironic tragedy. Christoph is very aware of the environmental headlight coming at us at the end of the tunnel. At the moment when humans have discovered our capacity for generalized justice, we could now discover we have turned our wonderfully made home into an overheated and unliveable EAARTH (as Bill McKibben now spells it). But surely, if we can make the social choices that have led to such radical decline in disease and violence, we can make the environmental choices that would make our common life possible.

We are far more likely to make those complex and lengthy choices necessary for climate change if we think the world allows for such basic successful choices. Perhaps the easier (if previously inconceivable) social and policy choices that have had such success in the fields of peace and health could encourage us to believe in the possibility of making and sustaining the right choices about carbon and climate. I say this as a Prius driver who recycles everything and brings my own bags to Trader Joe’s—all the time knowing that my carbon footprint is probably way greater than my parents’. My environmental symbolism is a kind of complicit despair enabled by the fact that I don’t really think it can be different. The successes of global health and peace challenge that complicity. It can change, so I must change.

The International Religious Health Assets Program rests on a similar warm-blooded view of reality that systematically notices the wild abundance of tangible and intangible assets exactly where you don’t expect them—in the tough town on the northern rim of Zambia, the Delta mud of Memphis, the left-behind factory villages of North Carolina. Look and you will see how much we have to work with. Many of them are animated by faith, though frequently a faith more obvious to the laypeople on the ground than the leaders in pulpits. That simply observation has driven an appetite for a more vital description of faith, spirituality, spirit that is more like energy and less like a brittle list of ideas. 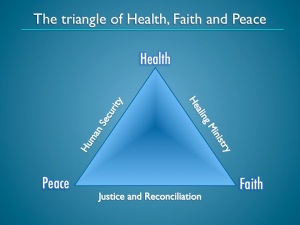 The voice of faith is too often trapped in a script more suited to the time before germ theory, primary care, immunization and systematic research into the social influences on health. Christoph, speaking to a most United Methodist audience, noted that the most profound moral energy behind the global health breakthrough on universal treatment for AIDS, TB and Malaria have reflected the prophetic voice of gay men more than traditional faith leadership. We (I’m one of the religious leaders) were satisfied with doing the best we thought possible, not what science and public policy actually made possible.

Can the voice of faith give us courage and wisdom to change a lot more than we thought we could? Of course, it can. But we need a fundamental reset to our view of the world. Otherwise, we lend our silent weight to the shrill, mean and small voices that chant there is not enough and will never be enough for justice to be a serious choice.

Their faux realism assumes a world that would force us to choose between those we look like against those we do not. The world we actually have is more like the one Dr. King called Beloved. You can look it up.

(If you’d like a copy of Dr. Benn’s manuscript and/or powerpoint from the Lake Junaluska Conference on Peace, Health and Faith, drop me an email at ggunders@wakehealth.edu)