Posted on February 16, 2017 by garygunderson 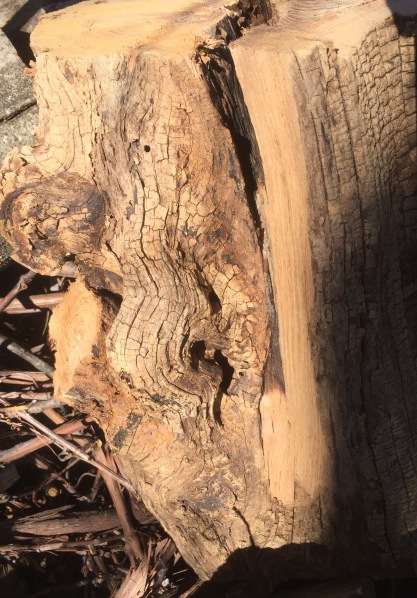 Even lying in the brush, just barely cleared of the vines the old apple wood is like sculpture.

How is the post truth era coming work out for everybody? Turns out it doesn’t take long for truth to pop out when you least expect it like dandelions on an early spring lawn.

You Know Who has already passed his tipping point, although much damage remains to be experienced with the collapse of the trappings. Every goon in the wide world sees their opening, so a lot of young men and vulnerable women are going to suffer while he and his minor minions tweet, flay and golf in their bubble. He is his own parody, only believed by a shrinking portion of his sad and anxious core who are already starting to peel away in embarrassment. It is already past time to be afraid of him and his overmatched helpers.

It is critical that we not amplify the damage of the collapse by reinforcing the false boundaries he has worked so hard to draw between citizens and humans who actually share real challenges. I am thinking of the many left behind towns in North Carolina filled with people who care about each other just as we occasionally have a chance to care for them in our medical settings. Most of the people in this part of the state voted for him, and not all with mixed feelings. Many are deeply frustrated and angry. But is a false boundary drawn between the vulnerable white, brown, blue and black. It is a false boundary drawn between Baptist, Catholic, the nones and the handful of Muslims in part of the world. It is a false boundary between those who speak Spanish and those who speak mountain.

Do not let your enemy tell you who your enemies are. Good advice for politics or bars. That’s what the rural poor whites fall for every damn time, as the rich manage to convince them to fear and then hate someone entirely irrelevant to their actual problems such as Blacks, Syrians or Mexicans or Baptists.

And be slow to follow the herd of your friends’ fears, too.

In real life our identity, interests, hopes and fears lie every which way across the lines supposed to divide us and contain us. This is why the communion table has no gate and no price.

This is why great drama is so disturbingly powerful; it helps us see the astonishing way that humanity is found across all the divides that benefit the rich and powerful. But what are words for in a time supposed to be beyond truth? They bring us back to truth by way of our humanity. I was talking about this with my daughter, Lauren, who happens to be the most produced living playwright in America these days (look it up). She should know.

In her most recent play, The Book of Will, one of the Kings’ Men tries to comfort a fellow actor who has lost his wife. They find refuge on an empty stage, which in Lauren’s mind is as a holy sanctuary. “History walks here, love is lived here, Loss is met and wept for and understood and survived here and not the first time but every time. WE play love’s first look and life’s last here every day. And you will see yourself in it, or your fear, or your future before the play’s end. And you will test your heart against trouble and joy, and every time you’ll feel a flicker or a fountain of feeling that, yes, you are yet living.”

The truth draws us across false boundaries into common humanity. This is exactly why the powerful and privileged pour time and fabulous amounts of money into lies. The truth does make us free; free from false boundaries. When anyone tells you to hate someone, ask who would benefit?

This kind of radical truth sizzles and simmers with the energy of liberation—another reason the powerful fear it. It turns accurate science and deeply reflected true language into fire.

Gradually the second life of the old wood emerges.

Earlier in the play a young woman explains to Ben Johnson why Shakespeare’s stories burned their way across lines of class and privilege: “A poet of the heart always beats a scholar. No highborn Latin rationalism can grip like a story of passion, of men and women alight with revenge or love or loss because we are animals at heart and isn’t that exciting. You wrote for professors, he wrote for people. And for good or ill, the later rule the world I live in.”

Roughly one and a half millennia before Mr. Shakespeare another traveling voice said with some passion, “” Whatever is true, whatever is noble, whatever is right, whatever is pure, whatever is lovely, whatever is admirable—if anything is excellent or praiseworthy—think about such things” (Philippians 4:8, NIV).

It is a time for true language in the pulpit or precinct, stage or screen, with keyboard or voice.

Even while still on the lathe the grain leaps into view with just a bit of beeswax.

Yesterday a small group gathered in the waiting room of the new United Health Center offices on Peters Creek Parkway not far from our home and even closer to the hospital. We gathered to anoint this federally qualified health center (FQHC) in the languages of those who see this as a sign that God hasn’t given up on the people in this funny little Piedmont town, so filled with poor and vulnerable people it literally doesn’t know what to do. An FQHC is about the only thing Republicans and Democrats like, although the structure dates to the earliest days of the Johnson era war on poverty. The first one actually started in a church in Mississippi by Drs John Hatch and Jack Geiger when the state legislature tried to block it from opening. Mercy is still a pretty radical idea that deserves anointing whenever it breaks
We closed in common voice, as we often do, “For God so loved the world that God sends us to live here. Never be afraid of who God loves. Never give up on who God loves. Now we go to heal and find our healing, to make peace and find our peace.”

Tell that story; don’t add to the dividing narrative.