Posted on October 4, 2015 by garygunderson

Across the street from The Garfield Conservatory, a block away from the L, a gaggle of geese find their way amid the urban mysteries.

There were years when I was across the ocean that I would tell people I was from Canada to avoid explaining US politics. People in more normal countries  dumbfounded my people would be found dumb enough to vote for a California actor obviously reading someone else’s lines to fill the most intellectually demanding job in history. Some Americans still talk of him with reverence, which is hard to explain. But since we elected our Harvard lawyer, it’s been a lot easier to travel.

Its not any easier being a Christian than an American. I work in fields with lots of science going on so am occasionally held to account for my faith. Nobody cares enough enough to hurt me for it, as in olden days. But for those who otherwise like me (sometimes including my children), it bears explaining how an apparently intelligent person would identify as a member of Jesus’ or any tradition of faith. Like claiming Canada next door, it is easier to say something vaguely ethical rather than saying I go to that most odd of all human assemblies, a church.

Francis has helped. But even in a week in which it would really hard to screw up being a Christian, we have had nutters from Arkansas chattering away near microphones embarrassing generations of Christians. If Francis watched any TV while he was here last week, he probably thought about taking his robe off to just blend in with the homeless.

We think of our traditions and learning groups as independent and accountable, but actually they weave, influencing each other and shaping the whole.

I think of our traditions—mine being Christian—as learning groups more than knowing groups. My most powerful relationships are like that, such as the Africa Religious Health Assets Program (ARHAP) led by Jim Cochrane, Steve DeGruchy, Paul Germond and now Jill Olivier. A whole literature has emerged from its thoughtful journey, now thousands of pages. Groups don’t learn in a straight line and sometimes wander into dead ends (especially when they put on conferences with papers). But if we keep our learning grounded, we can find our way back out. AHRAP accumulated epic stories of finding, naming and mapping. But its most useful tools are those for optimistic searching (such as the assets mapping now about to be trusted by hospitals, public health and community partners in Tacoma).

That curious community spun off another one pursuing just one of its questions, about the Leading Causes of Life. Those Fellows cross the strangest boundaries of intellect and miles, as great questions always have and will draw us.

Stakeholder Health was originally the “Health Systems Learning Group” and remains useful when in learning mode. We’ve are drawn to the questions that lie in between hospitals and  their neighborhoods, borrowing and bending the language of clinical,  public and population health. The questions look technical, but draw us into deeper waters.

Technical kinds of answers are not the most interesting or obvious thing being learned. Along the way we have been learning about the defining characteristic of our group—most of us as both individuals and institutions were of faith. But not all of us are officially faith-ish, which is what makes the whole group so interesting. We’ve talked and sometimes argued about whether Stakeholder Health is “based” on has “faith.” What we mean by those words? Is it important? Does Henry Ford Health System have enough to count just because it has among the very largest network of faith community nurses in the nation? It reflects the man named Henry Ford, not Jesus, but sustains an often sacrificial mission finding innovations where a mere corporation would flee. What’s the name of that driving spirit? Most hospitals with religious names on their buildings don’t think or act any differently toward their patients, neighbors or employees—and many much worse—than massively profitable Cancer Centers of America. But some do find the wells of compassion to give their life away decade after decade. Iconic little Bon Secours in West Baltimore sure does and, yes, those are nuns all over that history, just as surely as the Pope is Catholic.

Many of our organizations are now merged and morphed—Brooklyn Lutheran part of staunchly secular academic NYU. The blended hospital and medical school called Wake Forest Baptist Medical Center will discover the cure for cancer before we figure out what to do with that middle word in our name. These complicated relationships are being carried by what we are learning, not by what we are based on; faith more like a sail to catch the spirit than anchor to hold us back. 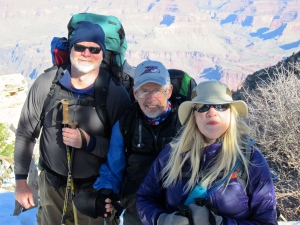 We are who we walk with along our learning way. (Kevin, TC and me. Jim Cochrane holding the camera.)

People from outside hospitals notice that interesting things are happening inside. Peter Berger edited a special edition of “Society” looking at the complicated dynamics of faith in modern hospitals. Some of the pieces are not brilliant, even borderline snarky. But Berger’s introduction is tantalizing as he speaks of those of working inside the places: “They cope with reality in both secular and religious terms and they find ways (not necessarily coherent theoretically) of applying the two discourses in different parts of their lives. Is that feasible? We already know it is. The interesting question is how it is done! The question suggests a fascinating research agenda.” (Society, October 2015, Volume 52, Issue 5, pp 410-412)

Last week the learners of Stakeholder Health convened in the Garfield Conservatory in West Chicago, which for more than a century has protected space for the flowering of learning about plants. Its human story is as exotic as the plants, especially how they won’t quit when surrounded, literally, by gangs or rapacious politicos. Or when only a year after the massive dome was built, thousands of panes of glass protecting the tender palms had to be replaced because the wood frames were rotting (cheap wood). You’d think God would protect arboretums along with fools, but it turns out not.

It often takes a learning community decades to flower, especially when the questions outlast the curious. Jerry Paul, who led Deaconess Hospital in St. Louis and then its equally faithful foundation, formed when the hospital was no longer needed and lent his intellect to the founding of ARHAP, died suddenly in May of fast-moving cancer. Steve DeGruchy died in fast moving water before he even wrote his real book. Larry Pray has lived through another and then another and another stroke stealing his memory even as his spirit is defined by poetic appreciation for life. I’m not so young myself.

Faith is a fellowship, not just a bundle of ideas; marked more by with, than what.

We find life in the questions that outlive our answers.

We are defined by those with whom we seek.

We are what we find in each other.

We are what we think about and how we help each other learn.

We are what we ask of each of other.

We are what we notice in other groups also finding their way, by how we lend and borrow.

We are not the first or smartest humans to do all this.

We find nobility in humility before faith and its mysteries, complicities and community formed and still forming across the years.

It’s Sunday morning after the two big storms have passed; I think I’ll head up to church.