Spring time trees are not in the majority of in the Grand Canyon. But a little spring of water is enough.

The Pew Research Center released a report this week, America’s Changing Religious Landscape (here). The meticulous study showed what anyone in any Starbucks would already know: people in the United States remain vaguely Christian but are increasingly confident about liking none of the religious offerings at all. Those who subscribe to nothing much in particular, the “nones” are just under a quarter of all Americans and they are a rapidly growing plurality. Americans are increasingly uninspired by the incumbent religious teams just as they are by their incumbent politicians. But religious groups don’t get to gerrymander districts, so we still end up with 435 elected people in Congress even when many of us prefer “none.”

The extremely well done report lacks historical perspective, which would have helped to avoid the handwringing headlines about decline. Actually, we’re seeing a regression to the historic mean. Some Americans (who were not already here) came to escape religious idiocy and persecution (the pilgrims, Quakers, Moravians etc.). But most of us came for better farmland and a chance to not die in some rich persons’ war. My great grandfather didn’t want to die fighting a Swedish king, so he came to Wisconsin, which doesn’t have any kings at all and now believes mostly in the Packers. He was officially a Christian of a Lutheran flavor; but mainly he was hungry and he wasn’t mean. He fit in and helped build the new country with his hands, heart and hope. That’s normal here and still is.

The “nones” are young and unafraid of authority, knowing that nobody in power is going to look out for them in the wildly uncharted swirl of 21st century globalism. Who cares if you’re Baptist or Catholic when your job can evaporate tomorrow because of some disruptive innovator from Bangalore? My two daughters were raised as liberal Baptists and maintain impeccable social values of which I am proud. But they were raised in a lamentable period of public puffery and religious meanness so they, now living in Austin and San Francisco, would be firmly among those claiming “none” as formal affiliation. Kathryn says she knows almost none of her friends who go to church and can’t see what it adds. “There are plenty of obvious reasons to be a decent, caring and generous person; religious more often makes you mean and exclusive.” Both of my kids are filled with appreciation and wonder right next to awe. I wish they showed up in church most Sundays to find sustenance, guidance, inspiration, encouragement and fellowship that define my life. But  I can see that “none” means organized participation; it doesn’t mean no spirit. There is lots of evidence that the nones are highly active in their community as volunteers, donors and voters. The problem isn’t meaninglessness among the nones; it’s the visible meaninglessness among the Christians. 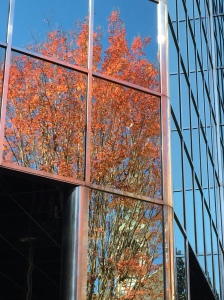 Seven out of ten American are still sort of Christian; at least enough to say so. But if that means affiliation with denominational flavors that remind one of Howard Johnson’s or Montgomery Wards, in another couple decades it will be half that. And I don’t even think God cares how many people attend irrelevant churches. I think we should happily shed another 30% of those attendees who think Jesus looks like one of the Mad Men and Mary one of their Barbies.

The none’s are asking whether we have anything worth lingering on our websites to read, anything worth singing that isn’t stupid, anything to lend energy to that looks like life. In the United States you don’t have to do anything religious ever and never have. So most don’t and never did. At the same time our common culture which is the seedbed of every significant innovation and social infrastructure sparks and sizzles with the energy of those who sense there is more possible than has yet happened and that their spirit could be part of something more and new. Life may not be random; it might be something one could participate in on purpose. We might be creatures capable of more than eating and pooping, buying and selling, owning and trashing.

There might be a spirit worth our very lives. A tiny minority of Americans has always said yes to that. And still do.

People have asked that of our faith before. And they have found and founded movements of great energy, intelligence and consequence. That’s what happened with Francis and Waldo of Lyon, both still resonating a millennia later. That’s what happened in the decades surrounding 1900 when nearly all the great hospitals were born, as was the whole fields of public health, social work, nursing, counseling, with all the public policies their emergence demanded. There was a movement of spirit that enabled and was intertwined with the movement of science. The Baptists in North Carolina invented a hospital, as did the Methodists near Memphis founded in the hope that they could channel the astonishing new sciences and the equally shocking new relevance of old faith.

People of faith should see the nones as potential partners potentially open to doing real work, and nothing but real work. Sort of like Jesus and the Pharisees, except we’re the Pharisees (which are not the ones to cheer for). When John’s followers wondered if Jesus was the real deal, he told them to look at the metrics, outcomes and measures that mattered to the lives of the poor and abandoned. He didn’t ask them to count members.

The oldest baptismal font in the West in the basement of the Cathedral of Naples. New life happened here since the 3rd century.

The problem of faith isn’t with getting the new generation to believe. They’ll believe if they see. The problem is with getting the creaky crap out of the way and in the grave where it belongs. “Why look among the dead for the living,” the smart women asked at Jesus’ open tomb. It is very hard to see the Jesus movement as novel, transformational, radical, astonishing, compelling when there is so much dusty structure surrounding it.

What if we Christians believed our own stuff enough to be noticeable? What if the Body of Christ embodied spirit, intelligence, social creativity and reckless selflessness? What if the leaders of the creaky old institutions read their own founding documents and showed a fraction of their founders’ risk-taking verve?

1 Response to None Sense