Earl Williams led the gathering in prayer, reminding us that the first July 4th observance celebrated the end of a war, not the triumph of military. The two looking on would not have been allowed to vote, own property or be considered human, much less citizen then.

Jefferson, the pompless patriot, would have approved.

Thanks to the Daily Beast and my brother Ron who forwarded their article, I learned that exactly 1,003 steps from my home near the Square in Salem, the Moravians had created the very first July 4th celebration in 1783. The war had ended allowing the busy little pacifist outpost on the American wilderness to go back to creating a peaceful Christian village. This afternoon they did it again with their hallmark quiet dignity, prayer and brass–the musical kind, not the kind that Jefferson hated. (Read the terrific article here: http://www.thedailybeast.com/articles/2014/07/04/the-first-americans-to-observe-the-4th-were-moravian-pacifists.html ) 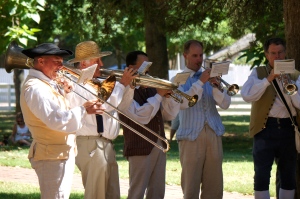 The Moravians never miss a chance for brass music.

The Moravians, Jefferson and all of us citizens since are a curiously flawed and frayed, yet bold and hopeful, experiment. We’ve had better and worse moments. The failures have always and still do involve  ones Jefferson knew well—race, global entanglements and religion that lived out its dumb and mean side rather than grace and hope.

The Moravians knew them, too, compromising on all of them at some point. Yet here they are 231 years later still trying with old prayers and renewed hopes.

We prayed now, as then, for peace and practical fruits of faithful virtues.

This week marks my second July in Winston-Salem after seven in Memphis and many more in Atlanta. I am at home with humble prayers, flawed movements and compromised leaders who are still trying to do the right thing despite it all. I am divorced and remarried, with all the good people involved bruised yet healing and sometimes joyful. I have new work colleagues, too, some still reeling from my arrival, but mostly forming into a smart, tough and bold team.

The reason I came—to help a very good academic medical center with a great heart find its way toward fulfillment of its mission of healing the community…sort of like happened in Memphis. Since I came the medical center has had its two worst financial years since its founding in 1920. But it has not blinked or paused to take some radical moves beyond its walls. This reflects the deep commitment of Dr. McConnell, the Board of Directors and many faith leaders who have followed Ray Howell at First Baptist of Lexington, the first signer of the FaithHealthNC covenant. 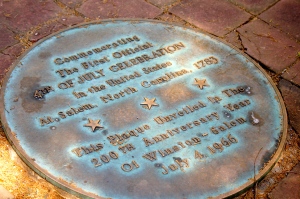 The site of the very first July 4th celebration, then on the edge of the American wilderness.

Tomorrow morning some of our physicians who model the integration of faith and health will hold a free clinic at the Mosque a mile to the south of Salem Square. Their Mosque is right in the middle of one of the census tracts the hospital knows because of the high concentration of charity care—and all the predictable conditions of poverty and exclusion. There are no medical care facilities for thousands of people–a clinical wilderness as profound as when the Moravians came to town a couple centuries before. The Muslim physicians will pray for the healing of the neighborhood and also for the end of wars far beyond.

God, who hates religious pomp unconnected from practical compassion, is probably trying to answer both prayers, looking all the time for flawed and frayed people to have enough faith to keep trying.