Posted on February 22, 2014 by garygunderson

Two weeks ago several of us from Stakeholder Health were part of a special roundtable of the Institute of Medicine exploring new models for advancing community health. Kevin Barnett (Public Health Institute), Debbie Chang (Nemours Foundation) and Teresa Cutts and I. The driver for the conversation began out of a mind of need; how to find the missing dollars for public scale efforts. The traditional organizations responsible for public health are facing a fierce competition for funds and are wondering if they can get at new pots of money. One of the most obvious targets is non-profit hospitals’ community benefit funds that are newly visible and newly accountable to modest links to community health. This is like thinking of the Greenland Ice Cap as part of the solution to drinkable water in Africa. The equally vast amount of community benefit dollars are just as frozen; locked in the continual blizzard of reactive charity care provided at the emergency room. (I’ve posted Teresa and my testimony on the Presentation Materials page of the blog .)

There is no hospital check in the mail. But there is some inconveniently good news found in the surprising new partnerships moving toward exactly the most vexing public health challenge. 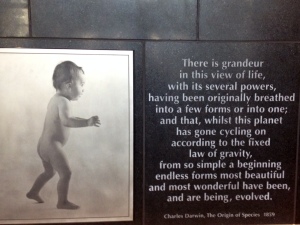 Darwin quote at the entrance to the Institute of Medicine

The big drivers of public health are the social determinants of health.  Heather Wood Ion immediately notes that almost nothing about humans is “determined.” Everything about us—and communities of us—move, change and evolve.  The most obvious thing about humans is that we are complicated and that over time the accumulation of our odd, partly rational and often unwise choices affects our individual, family and community health more than all the preventive or curative efforts of medical professionals combined. By quantum squared, actually. The strength of the health sciences is their rationality which has driven a brilliant, if brief,  hundred and a half rocket ride of discovering which has resulted in most of what we know as both public health and healthcare. Scientists have rationally posed and tested hypotheses about all manner of things from tuberculosis to the latest microbes to make their way from bird or beast to humans (Nathan Wolfe’s little friends, we call them in our family).

This powerful beam of discovery has overshadowed the arts of nurturing human choice. We have drifted toward the assumption that humans act rationally. We know better: while capable of rationality, humans rarely use it in their natural course of living their lives. We do not flow into structures and forms designed by rational scientists like concrete might into a sturdy foundation or retaining wall. Indeed, we seem to have an inherent resistance to being poured and formed at all.

Jacques De Klerk speaks of the arts of hope.

Speaking as a human, I don’t like to be formed any more than determined. But I—and we—most  certainly want to be something more than we are. We want a gardener, not a bricklayer. Last month a group of us met near the Cape of Good Hope, South Africa. Amid the sophisticated theoretical discussions of this and that, we found time to talk with Jacque De Klerk the chief wine maker at The Winery of Good Hope. He spoke with love, appreciation, wonder, respect, curiosity as well as reason about the work of bringing all that the grape seed makes possible out of the soil and into the bottle. He was more in awe of the complexity of wine than I usually am about the complexity of human community.

The phenomenon we call “the public” is more like a well-watered garden ( and surely Isaiah 58 is about a vineyard!) than a rationally constructed machine, even one that integrates all the things the best intentioned scientists might think.

When we reach the limits of purely scientific imagination we find the possibility of others’ imaginations. This is what the Institute of Medicine began to discover last week as they heard some remarkable testimony, including that from Nancy Andrews (Low Income Investment Fund LIIF) and Donald Hinkle-Brown (The Reinvestment Fund) both doing large scale integrated community investment in housing, transportation, education which, it turns out, have dramatic consequences for health, too. These are not “public health projects” but projects with great relevance the health of the public. They are smart about people and places; interesting partners if you want healthier people and places.

“Social complexity” has been used in the health sciences and especially in healthcare practice as a polite way of talking about the tangled mess of bad stuff  that defies rational response and treatment. If you want to advance the well being of complex human systems start looking for partners who are not afraid of human complexity and, even like it.

We have work to do, so don’t make the metaphors do all the heavy lifting. We humans are capable of acting out of our most profound capacity, which is to imagine new relationships, practices, places and programs that have never existed. We can not only extrapolate incrementally one rational thought at a time, but also work backwards from the future, testing ourselves against what might be, if.

That “if” attracts a lot of very curious array of partners. They might be better than a check in the mail.