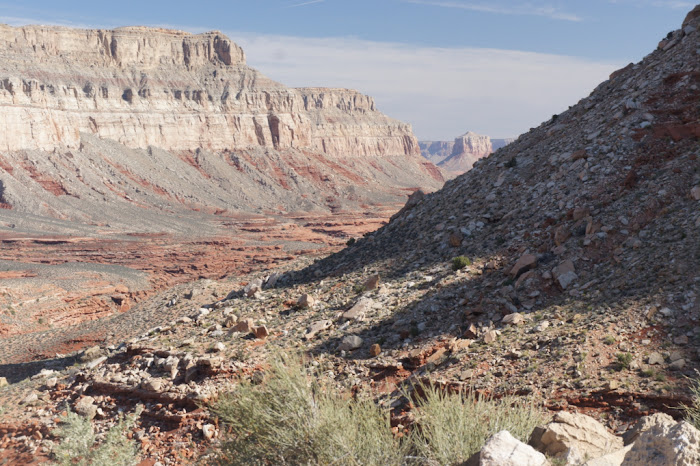 Slept open to the sky Tuesday night, our first near Havasu Falls in the Canyon. I witnessed Mars red among the blue white stars sharp on black. It  moved down the rim until it crossed over the gap and finally out of sight. I opened my eyes to the light of dawn and felt Spring wind on my face and, being me, reached for my Springsteen’s Live at Dublin where his soulful first words were, we are all traveling in the footsteps of those who came before.” Resting on land the Supai people have walked for a millennia, reminds me that I am here only by history of violence that has benefited me personally at cost to other entire generations to whom this paradise belongs. Their footsteps have been bitter ones. That comes as news to those of us who live on privileges we did not earn, a simple fact that cannot be repaid. That is not to say that we do not now share the world. Springsteen, who knows a bit about privilege himself, closes with “we shall overcome” and means it, just as I do. 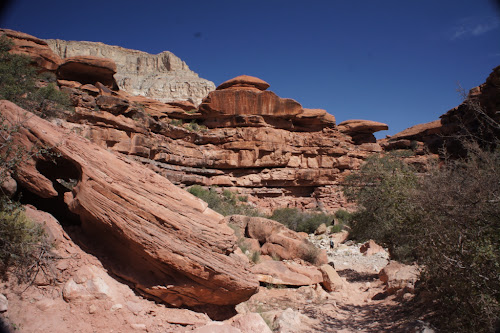 If you are a rock, you are more likely to be changed by wind than water. Millennia before sandpaper air and grit sculpted and carved and then removed mountains of stone. Water does it work in relative speed with more drama. The Havasu Falls of postcard fame changed in August 17th of 2008 when a massive storm blew out 80 feet of silt, took it over the falls cutting new channel through the rock burying the campground under 8 feet of new soil.  I am sleeping on top of that very newly relocated soil, which puts my whole body in touch with how changeable things are. The postcards have not been updated, but in another few years people will think this is the way it has always been. All along these canyons you can see logs high up on the walls left by floods, some recorded and some before human memory.

People talk about the water, (the flood of 08 and 1910 come up a lot). But it is the wind that does most of the heavy work over time and then more time and more time again. You can’t miss it here, but this is just as true on the Delta. Memphis exists because of its several hundred foot high bluff, which is actually the very last little bump left of the tale end of the Appalachians, the rest of which is buried beneath the mud. The Beale Street bump will go too, eventually, as wind will have its way. 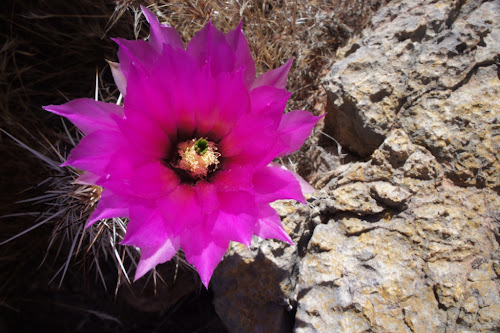 So I think about change and how it happens. In human organizations money is water, language wind. If you are a hospital and CMS changes its reimbursements change happens fast. A senator’s family needs dialysis and suddenly CMS pays for it for Medicare and suddenly dialysis clinics sprout as mushrooms in the night (still the fasted growing business in south Memphis)(and this really is why dialysis is covered as it is). The Affordable Care Act is like a cloudburst that could blow away ancient  channels, cutting new ones in healthcare organizations. But most of the big changes are already being driven by administrative rule-making, forcing hospitals and doctors to be different. The heavy weight of money is already shifting the choices in executive offices and physician offices. Forget the Supreme Court, the new channel is already open.

The power of language is more subtle, but more profound–like the breeze, hardly noticed on any single day. Language of fear, resistance, anxiety, force and hiddeness cripples an organization, binding it to the past and its certain death, for the past is never where life lives. Language of life — connection, coherence, agency, generativity and hope–tunes the whole social body to the life of the present and thus the future.

“Health” organizations are always adding detail and nuance to the grammar of death, dying and disease. This is relatively new, more or less since the discovery of germ theory in the 1870’s. Now we think there are things like germs for almost everything and rarely a week passes when we do not have a new word for a newly recognized condition. Many of them actually do exist so not long afterward somebody gets a grant to figure out what to do about it and sometimes they come up with something that eventually finds its ways into the list of things somebody will pay for and thus it enters into the repertoire of modern medical practice. This has been going on for a century and a half now, accelerating its pace all along the way.

Nothing at all like that has been happening in our understanding of life, which is the thing that gets sick, the process that is interrupted, the daily dance of family, love, work and delight. Life! This is true not just of our intimate scale lives, now so richly detailed by the language of pathology and all its specialists. It is also true of social and organizational life with squadrons of consultants swarming like mosquitos filled with knowledge of anything but vitality. 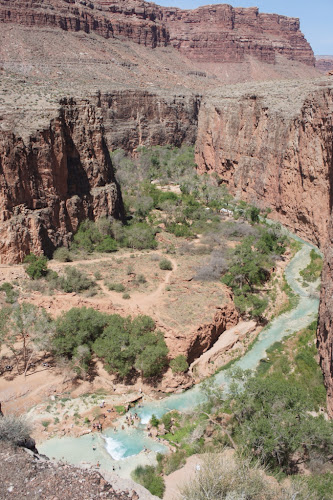 To blend Mary Oliver and David Bohm: In the presence of the “unlimited,” pay attention. Do not go alone. And then, in humility and awe, dialogue. Bohm wrote a book with that title, but you can figure out how to talk, as long as you have some words to work with–words that carry us deeply toward life and those things that lead toward life. Everything that is alive needs a way to do that, including the social bodies informal as friends and formal as hospitals and governments. Language is how human social bodies adapt to the changes and challenges we inevitably face in our brief moments together.

It makes a difference if we have a way to talk to each other about what gives us life, and not just to postpone death. A week in the canyon and it is impossible not to notice that human life is nearly as short as a gnat’s breath. The difference between 11, 31 and 61 is no big deal, but neither is the distance between 61 and compost.

I will die, and maybe you too.

But will I ever have lived? The price of admission is to pay attention and talk as if it was a matter of life, not death.