Posted on November 6, 2014 by garygunderson 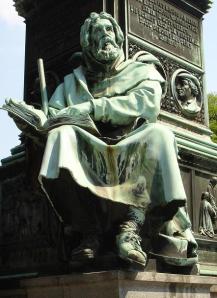 Statue of Peter Waldo at the Luther Memorial at Worms, Germany.

So there was an election earlier this week. I won’t comment on it, partly because I’ve been confused about US politics since Ronald Reagan was elected….twice. This seemed like a good week to reflect on the long term vitality of who survived amid and outlived centuries of mean and stupid Authorities, the Waldensians of Italy.

Waldo of Lyon is, like Francis of Assisi, a nearly mythical icon of radical faith and renunciation of wealth. Unlike Francis, Waldo walked  away (ran, actually) from the Catholic church in 1170 and founded a movement that was then hunted like dogs by the priests and prelates and eventually chased up into the high Alps where they were trapped in mountain ghetto. They survived for centuries through an improbable and complex web of “friends” who found it useful to have a radical protest movement in the heart of Catholic Italy. The Waldensians, as they are known, were basically the high altitude protestant Jews. They were like the Jews in other key ways, keeping distinctive culture and as high a level of education as possible generation after generation. Their mountains served as a refuge and staging ground in the second world war for resistance movement of which they and the Jews were key partners. The Jews and Waldensians only eventually received full civil rights in Italy in 1984 about two decades after Blacks in the United States. I won’t even begin to try to outline of their astonishing history. On film it would have more blood than any Mel Gibson flick, but with accents of “To Kill a Mockingbird”(Gregory Peck would make a great Waldo!) and “Guess Whose Coming to Dinner” (for their radical and annoying hospitality to minorities). Amazing.

Mia Casa is a ministry of the Waldensians responding to the 1981 earthquake that left thousands homeless in Naples. This looks a lot like a church committee, like thousands of other ministries around the world. It is. More than 30 years later the ministry finds new ways to build hope–and is still finding its own way, too.

Waldensians are not contained safely in the past, but alive and relevant in a world that is post-Christendom, post-Empire (Roman and US) and post-industrial. These are good people to watch if you want to know of what we are “pre.”

They have surfed and sometimes nearly drowned in multiple waves of religious enthusiasm and political weirdness for nearly 900 years. Today, they are a thread in the Protestant fabric, woven in officially with Methodists. Their long ties since they endorsed the late-blooming reformation in 1523 sometimes makes them almost indistinguishable from Presbyterians. And that one damn near killed them. John Calvin called them “Nicodemian Christians” because they worshipped in secret places high in the hills, rather than at noon in town like normal Presbyterians. They tried it and were slaughtered by the Catholics. Thanks for advice, John.

Today they share the general Euro-American-protestant angst about their comparatively ancient membership, dearth of new leadership-quality pastors and a sense of cultural irrelevance in a world too busy with their iPhones to notice God, much less church.

Another congregations, this one Catholic in CastelvonTuro, north of Naples. The astonishing sanctuary murals done by one of the thousands of immigrants the church serves.

Their history is both a corrective and encouragement to people engaging in the public exercise of their faith, its complexities and complicities. I’ll look at that in the next blog. Today I want to look what they teach us about Deeply Woven Roots. I wrote a book by that title that would have been a lot better, if I had known about the Waldensians (It’s still pretty good and available on Amazon.).

Since we started painting on cave walls, and certainly since the early 1100’s, the most radical thing humans do is to go to the edge of what David Bohme called “the Ultimate” with a handful of others and dialogue deeply about what they find. There is no predicting what happens next, ever. In Lyon, as in other parts of disintegrating empire, what happened was a movement that swept people by the thousands out of their compliant and complicit roles into lives of radical liberation. As a result of that liberation, they gave themselves to each other and to the poor and sick. Sometimes, this caused them to confront, but more threateningly to ignore their contemporary governors, generals and Wal-Marts. 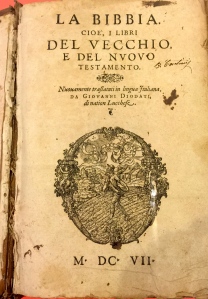 One of the first things the followers of Waldo did was translate the bible into their natural French language so they could read for themselves what it said.

They developed new language born of re-examination of the sacred texts, which was possible because they translated those texts into common language (in the Waldensians’ case, the first in French). And they sang, worshipped, prayed, wrote and acted on what they came to know as true. They came to know the truth and it made them not only free, but odd (thanks Dr. Wayne Merritt for that insight). This is pretty much the script for every movement in the past millennium that held up after the death of a charismatic founder figure. I have no idea how that happens in our iPhonelandia. But that is likely what will happen next whenever “next” happens.

The places Waldensians worship today are deceptively beautiful, looking like the best idea of about three or five generations of architects ago. In fact, they were –and on good days still are—a crack in the universe where you can see the Ultimate alive, wild and unpredictable. Perhaps you’ve look into the eyes of the fluffy old tame dog and see a glint of wolf? 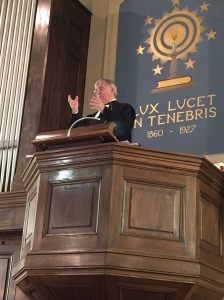 Rev. Gianni Genre preaching grace on Reformation Sunday. You just can’t guess what might happen next.

That’s the glint I saw in Pinerolo where Rev. Gianni Genre preached in the high pulpit on Reformation Sunday. The congregation (myself in included) was…..not young. But the word of grace is always new in the most disturbingly relevant way, as he noted that Protestantism in Europe is facing the “deepest crisis since the Reformation in 1517” and not just because of the declining membership, but involves a deeper question: “is there room for the Word in our lives.” Gianni did mean the rules, but the opposite. “Preaching Grace is an endless effort for being legalistic is easier than what we might think. Looking inwardly, dear brother and sister, you will find that the enemy of Grace is guilty consciousness. When we say that the church is for others, it seems that is not for us because we feel inadequate, insufficient and lacking. But today we ask the Lord to let us perceive and receive the overwhelming strength of his boundless Grace, of his free and gratuitious love that liberates our minds, transforming our congregations into sites for encounters, gathering and communion.”

That still and yet wild power does not fall from the sky, it grows up from deep roots.

A congregation congregates, which mostly involves standing around talking, like this one the Chiesa Evangelica Valdese Di Pinerolo.

Congregations anywhere have eight core strengths that are like DNA that express themselves in relationship to the environment and times they find themselves in. They are strengths of the social life, not of the clergy or people temporarily in charge. This is important for those inside one of these crazy-making phenomena, but also critical for those in community, health or governmental roles looking for community assets relevant to what they think of as “social determinants.” I don’t know why you’d ask for help for something you think “determined.” The reason people of faith are useful is that tend to ignore the name –and the odds—so turn those social determinants into variables. They do it over and over and over and over and over again century after century. That’s the most dependable sign the Ultimate is alive and wild, cited in Paul’s letters and the game plan of every community organizer with a brain the size of a pea.

These congregational strengths are not tools or techniques. Knowing the strengths suggests where to look for the answers waiting for the right questions. Jonas Salk suggested this is always true for complex problems, which is why knowing where to look is key. In Liberia today, you’ll find churches convening to educate caregivers and to pray and bless those risking everything to safely seek the life of their neighborhoods. In South Winston you’ll find the Community Mosque providing safe space for a free clinic lending its trust to the doctors so that people can find their way to 21st century medicine. After the carpet bombing of Naples forced 40,000 people into the caves, three brothers and 10 congregations created a clinic that became Villa Betania hospital, still serving thousands every year. You’ll find Waldensians on the shore of Sicily literally pulling people out of the surf that the government would let drown. Then they subversively connect them to services they need to survive on land. The group embodies a different story so strong and true that those powers simply had to change their policies, softening hearts embittered by Italians’ savage shocks of economic vulnerability. And, there is no more iconic group than the Waldensians for the strength to endure and with grace and humor. Why? How?

The end of my book Deeply Woven Roots (Fortress 1997) said it best: “There is a certain craziness at the heart of the universe that is captured in the symbols of reversal, the upside-down-ness of faith. All faith traditions look upon the urgent anxiety of our time with a slightly ironic smile knowing that all that counts is not counted in the modern calculus of probabilities. So we find time to accompany the lonely, to convene a meeting of neighbors, to connect with someone in need with an organization that can help them. We expect God’s work to go on, so we go on, too, patiently telling our stories as best we can and welcoming the hopeful and hurting in to our safe space. We think we are witnessing the work of a loving God who has not given up, so we continue to offer up a touch, a word of blessing and hope. Because we are so broken ourselves, we pray and sometimes seeing our faith, weak as it is, others find their way toward God, too. This all sounds so somber, dutiful, and full of heavy purpose. That is not at all what it feels like. It feels like life, surprising life.

The oldest baptismal font in the West in the basement of the Cathedral of Naples. New life happened here since the 3rd century.

“I have heard it said, more than once, that you can tell if anything lively and new is happening in a research laboratory by the laughter. Humor and discovery are closely linked because both thrive on surprise. So does a living congregation. It turns out that God has hard-wired a joke into the universe that you only get once you have been to the breaking ground and been flipped upside down. Like all humor, this cosmic joke rests on unexpected reversal, and it is a good one. Humility endures while pride dies in the dirt; sacrifice endures while acquisitiveness ends with death; knowledge remains incomplete while love fulfills and is never wasted.   A laughing God nudges us in the ribs: “Do you get it?

“Congregations who get it accompany, convene and connect. They give context and sanctuary. They bless and pray. They endure and build healthy communities that endure, too.”

Some do so for nearly 900 years, as the Waldenians show.