Posted on November 3, 2016 by garygunderson

Science, faith, the english language, decency, and democracy seem to be hanging by an unraveling thread. Scant comfort to know other democracies are off the rails, too. We are on the way to South Africa, one of the few democracies more imperiled than my own troubled USA. I voted before leaving, of course, finding peace in the ragged assortment standing in the long line at the library. One of my tennis friends was handing out reminders to vote for his wife who is running for judge. Seems like a good person, so I hope she gets to serve. Same for The woman further up the ballet.

And I found hope early Sunday morning in Denver as I met with the leaders of the American Public Health Association a group torn by its science-based hopes for widespread health and its profound sense of how much those opens rest on the partnership with the raggedy, mess of humans called “the public.” Like anyone who can read, they were worried. But they—we—had no other plan than to hope and keep on working out of that hope.

I work for a hospital these days, but think entirely like a public health person. I came to the field of public health at The Carter Center, which was led by two laypeople who expressed their faith through public service—Jimmy Carter and Bill Foege, a former President and Director of the Centers for Disease Control and Prevention (CDC). The first major conference President Carter convened after graduating from President to Citizen was called, Closing the Gaps in 1986 which was a cooperation between the CDC and The Carter Center. The meeting illuminated the huge prevention opportunity in the fact that 2/3rd of all death before age 65 could be prevented based on things we already know. He and President Carter, another practical person of faith, then held a meeting of interfaith leaders to see if they knew that and could act on its moral implications. They didn’t know it, but rang like a bell when they saw it as evert religion thatt gas ever been places prevention of suffering on a higher moral plane than after-the-fact response. So the InterfaithHealth Program was born at The Carter Center and Bill asked me to help lead it. I noted thatI didn’t know anything about Public Health to which he said (I swear), “you’ll pick it up in no time.” Of course, he wasn’t talking about epidemiology, which is harder, but the ground game of public health of aligning the medical and community assets once science knows that is something to be done.

Before I took the job, I borrowed the pulpit at my beloved Oakhurst Baptist church to see if I could preach a public health sermon. It was easy to find relevant religious texts almost anywhere in the Bible you’d want to put your finger in, so it wasn’t hard. It was a pretty good sermon for a white guy. I’ve been a practitioner of public health ever since. I am proud to hold the title of Professor of Faith and the Health of the Public at the Divinity School at Wake Forest University while also being Professor in Public Health Sciences at the med school. I’m all in.

I later came to understand that our entire field of public health and our many institutions at county, state, national and global level were born out of the very same optimistic democratic rational engineering kind of hopeful politics that in the religious field is known as the Social Gospel. That fertile identical spirit also bore the fruit of most religious hospitals, which, like my Baptist hospital in Winston-Salem, were explicitly built in response to what we now call social determinants. You can google it.

I don’t know how the elections will turn out Tuesday; whether I’ll need Rauschenbusch’s muscular progressive Christian hope, or Bonhoeffer’s dark counsel of resistance. Either views the work of faith in the world as sacred because God so loves that world, the one we live in, the only one we have to hope for.

The abortion protesters outside probably don’t know there is a Faith and a health caucus in APHA with hundreds of members.

What both faith and public health view as sacred, blessed, honorable, worthy or praise and sacrifice—are the practices, behaviors, choices that lead to life, protect it, enhance it, extend it and spread its blessings widely across the people. The Hebrew prophets always meant the whole public whenever they said “people” and never meant selected individuals. There can be a lively dialogue between public health and faith because we are family; both optimistic about the future. We don’t think God is done; and we don’t think science is done. There are things to do worth doing together (even when some of us don’t care about God and others don’t care for science).

The health sciences have often been terribly disrespectful of people who are ill and vulnerable. The early history of public health is full of paternalistic, often racist, rant disparaging of those who live in horrible housing deprived of any decent education or sanitation. Hospitals continue to speak of “super-utilizers,” “non-compliant” patients and “frequent flyers” that produce “financial drag” on our business models, as if being sick was a recreational sport. I am trying to train our clinical and finance people to speak instead of JFP’s—Jesus Favorite People. They’re not all pitiful; they’re just people.

I met one of Jesus Favorite People on the way over from the Sheraton to the Conference palace we were meeting in. He almost bumped into me spinning out of the 7-Eleven with a couple boxes of Krispy Kreme’s (made in Winston-Salem, by the way). He was frumpy enough to be a public health guy, but the donuts made me guess “semi-homeless.” I asked him for directions and walked a few blocks, asking where he was going with all the carbs. He said he was taking them to some homeless friends, because he didn’t want to forget where he came from. “Wow!,” I said; “Are you a religious guy?” He said he grew up with an alcoholic Baptist for a mom and still didn’t know what that was all about, so he was an agnostic. But he admired Jesus. “Me, too,” I said; thinking Jesus would like this guy. He might have a career in public health (minus the donuts).

Hospitals have lots of people who are a complicated mess and we sort of muddle through. We recently had a different kind of story because two Spirited people engaged with creative freedom to see another way. The individual was a classic JFP, living with his mom in a trailer without plumbing or any way to clean his catheters, so a recurrent visitor to the ER for sepsis. He was running up north of $29,000 in costs just for the hospital until Helen and Jeremy invented a whole new way out of no way. Using all the skills of social and hospital systems, multiplied by the persuasive powers only found in a preacher’s wife and man of Spirit, they made the impossible irresistible: they man is out of the trailer and into an apartment, still in a tough life, but not involving the ER much.

Hospitals tend to see them as individuals hoping for mercy. Mercy is a lot to ask, so don’t under value the miracle of one guy out of a no-plumbing trailer. The Randolph case demanded far more than technical skill and dropping the financial policies. It demanded audacious imagination and the high arts of spirited persuasion. It did produce a good financial and medical story. The person was costing the hospital $29,000 and now is in his own apartment; not cured and still costing $1,300 or so. But how to describe one life turned around, reclaimed, dare we say, saved? Public Health knows there are entire neighborhoods of such folks. It hopes for more than one-off acts of mercy. Hard enough to speak of one miracle. How to speak of a pattern? 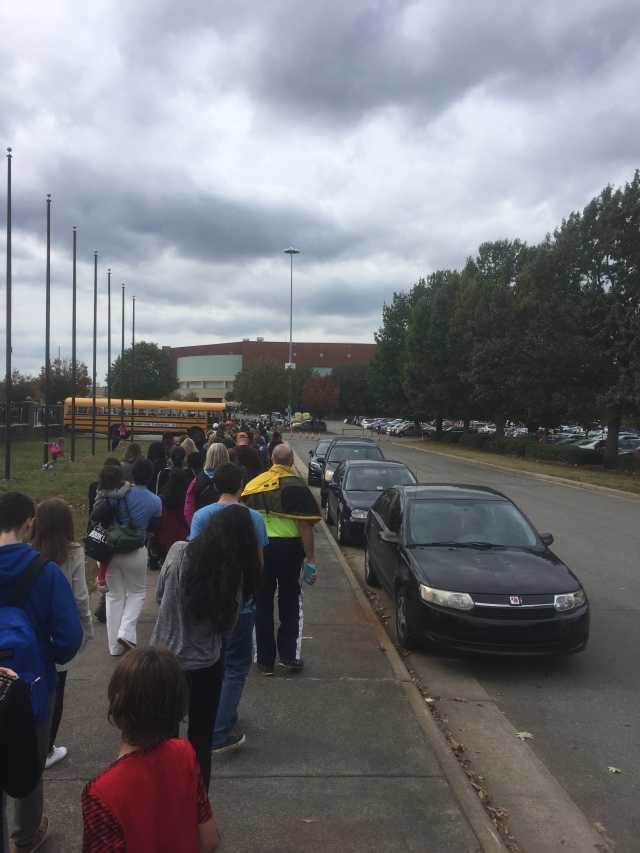 Lines to see Hillary and Michelle in Winston Salem.

The humanity of the story—and its outcomes—rests on Spirit and specifically the intertwining spirits of two key professionals. The story created many unlikely heroes including a landlord, pharmacists and churches who went way beyond their normal boundaries on behalf of someone with whom they had no relationship and could never repay them. They showed evidence of loyalty to someone who didn’t deserve it. This is common among mammals, which Haidt undervalues. Healthcare talks about dual eligible (those who qualify for both medicare and medicaid—the older poor) but this story is about a triple eligible, one qualified pretty much only because they are a human. This takes the creative moral freedom and spirited imagination. It’s hard and it often doesn’t work in terms of outcomes or savings. But its not supernatural; it’s part of human complexity, what Rev Joseph Lowery called good crazy. He said the love makes you crazy, which can be good crazy and bad crazy. Spirit makes you crazy, too.

My counsel to our beloved field of public health is to NOT stop talking about facts, analytics, determinants, vectors, patterns and predictors. But we must ALSO talk about our crazy love for the people–the public. And we talk about why we continue to hope for better, hope for more and simply won’t quit hoping no matter what. You can take our money, put us in the dumpiest offices and cut our staff. You can treat us as pitiful, hardly even as honorable as a primary care doctor, which in hospital world is hardly on the map. We won’t quit. Why? Because we are in a lovers quarrel with the public we love.

If you are a public health professional and cannot profess love for the public, I’d recommend that you take your high end analytical tools and move on down the street to do hedge fund manipulation, which is not played for life and death stakes. If you don’t love, you’re a danger to the public and the rest of us in the field of public health. Don’t even tweet.

By the way, we see this phenomenon in religion too. It is quite common that professionals—the preachers and the teachers of theology—do not love the church, synagogue or mosque. It has come to annoy and disappoint them to the point where they cannot abide its failings. They speak of change, but longer out of love. They are too far along in their lives, maybe have a kid in college or alimony, so they stick in the business, but without spirit, hope or love.It is worse than worthless, for they do delete the spirit of themselves and the institutions the people need.

Whatever happens Tuesday we can be assured of a hot stew of angry bitter vitriol. I will be very afraid for all that I value in the Republic, if the slick realtor wins. And I will totally understand the mind-boggling fear of those on the other side who have come to believe that my candidate embodies the corrupt cynical elitism they blame for so much gone wrong. 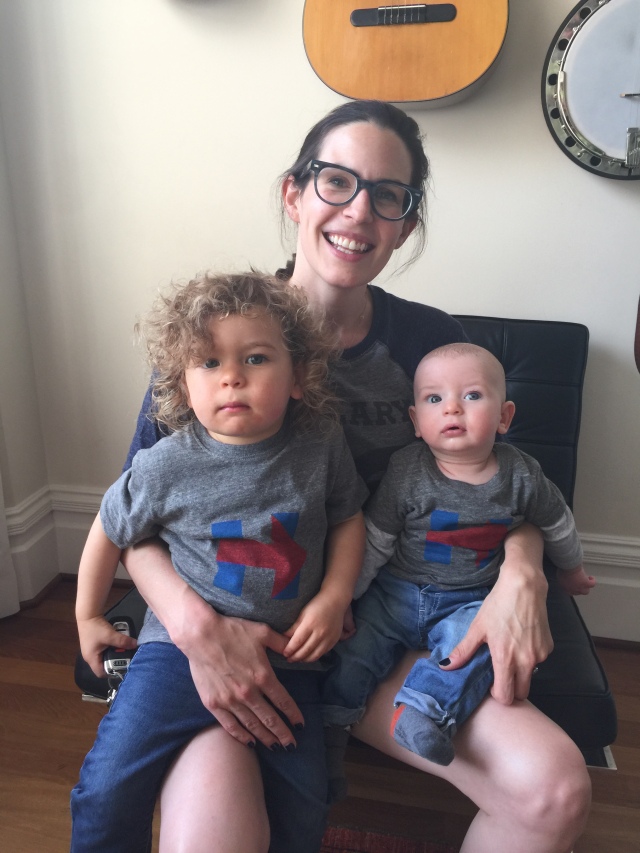 In the meantime, vote.