Posted on February 21, 2012 by garygunderson

Not all the religious nut cases are  running for office. Some of them park their vans across the street from government buildings in Washington. This particular brother (maybe cousin) parked across from the offices of the Health and Human Services where 28 faith-based and community-oriented health systems were meeting to talk about how our faith could drive a deeper and more effective partnership with a government that shares our mission for improving the health and wellbeing of our communities. We were convened by the White House and HHS offices for Faith-Based and Community Initiatives, led by Mara Vanderslice and Alexia Kelly.

What does faith have to do with life? At least four varieties of answers were on view in Washington in the past week. The one getting the most attention was that offered up by the Catholic Bishops whose lawyers would probably want them talking about almost anything other than sex. But they understand their role as laying down their understanding of what religion has to do with condoms and other means of interupting pregnancy, which is to say, life. Life is a non-negotiable good and that’s that, no matter that nearly all Catholic women agree with that principle, but do not extend it to cover contraception. Life is simple, say the Bishops. Not quite, say the Catholic women.

Another answer was offered up through the research findings of Gallup, which had a big meeting of academics just down the street. They were exploring the surveys of 676,000 Americans which indicated that Americans who are most religious have the highest levels of well-being. (I’m guessing the guy in the van was not in the survey pool.) The study “does not allow for a precise determination of why this might be the case” and promised to keep working at the mystery. Dr. Ellen of Ilder, now of Emory explored this some years ago making the link between participation in congregational life — not spirituality–so this is sort of old news. But don’t quibble: even with all its obvious ambiguities, religious people have more well-being. (Except for clergy, which have terrible health status. Apparently something like an overdose is possible.)

I returned home to Memphis where today a room full of United Methodist District Superintendents and a Bishop were meeting in the Innovation Studio, working on the future of the Church. The United Methodist Church has lost about 1,000 members a week  for 43 years in a row, so this is daunting labor. You can tell what a person has faith in by what committees they attend, said my Methodist father.  Religious life is about structure, connection, organization and strategy. (Where does Gallup think all those congregations come from?) So they were plugging away with maps, to-do lists and mounds of paper.

A fourth answer was offered up inside the HHS building in the room full of healthcare people. About 80 billion dollars worth of faith and community health assets were learning from each other about how to allow the best 21st century science to liberate their funding from an almost total focus on hospital-based medical care so that we can get at least  tiny portion of those funds onto the streets and into the lives of people who actually need something much cheaper than an emergency room. Over the next few days I’ll be posting links to the stunningly smart presentations offered up so faithfully by friends at Loma Linda University Medical Center, Henry Ford Health System in Detroit, Camden Coalition, South Central Foundation in Alaska.

More insights came from the Public Health Institute in Berkley, the Centers for Disease Control (advising the IRS on determining legal rules for community needs assessment) and HHS leaders working to drive innovation, liberate data and, more or less, “do the right thing.” For this group, faith is the hopeful energy that embraces uncertainty with curiosity, not fear. 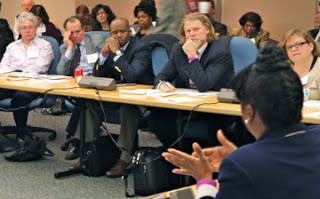 The faithful health systems were sharing how they might do something never done before–achieve a merciful and just community marked by health and wholeness. The dude in the van across the street could only scowl. But amid the data, and amazing tools of GIS mapping, financial analysis, creative clinical management and public scale policy you could feel the spirit of possibility breaking through.

(Powerpoints should be available online later this week.)