Posted on December 18, 2011 by garygunderson 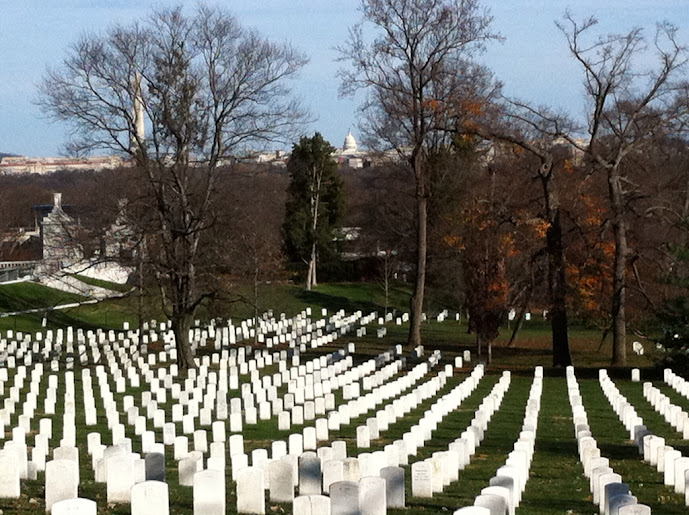 A couple weeks ago I was in Washington DC and had a few hours before my plane, so I walked the Arlington Cemetery and then to the airport along the Potomac. I had walked that cemetery nearly forty years ago one Winter and remember reflecting deeply on the thousands that gave their lives for others in some brutal, violent and painful way, mostly dying far younger than I am today. From the hill through a gap in the trees you can see the Capitol in the distance. I don’t get the impression that many people who work over there make it up the hill to where are the young men are buried. They may vote for the monuments and puff and rant as if they themselves would sacrifice, but its been a while since they actually did anything selfless, much less sacrificial.
But for the last 18 months we–the citizens of this nation–have actually been able to watch a civil servant at work, Dr. Don Berkick. The mean and dumb politics under the Dome ground succeeded in preventing him from holding office as head of the Center of Medicare and Medicaid Services more than that short time, but he has used every minute. And, judging from these excerpts of the speech he gave to the Institute for Healthcare Improvement right after leaving town, they did not manage to take away his spirit for the majesty of the work of government. I urge you to read the whole speech (  ). But a taste is attached here: 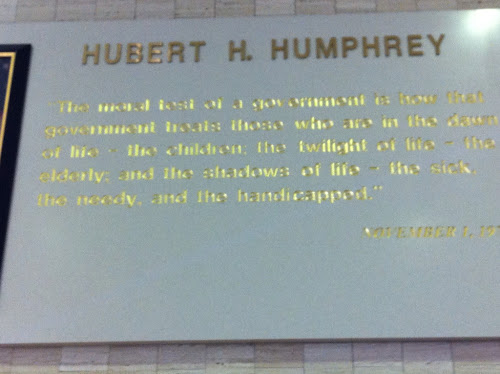 “Inscribed on the wall of the great hall at the entrance to the Hubert Humphrey Building, the HHS Headquarters in Washington where my office was, is a quotation from Senator Humphrey at the building’s dedication ceremony on November 4, 1977.  It says: ‘The moral test of government is how it treats those who are in the dawn of life, the children; those who are in the twilight of life, the aged; and those in the shadows of life, the sick, the needy and the handicapped.’“I believe that.  Indeed, I think that Senator Humphrey described the moral test, not just of government, but of a nation.  This is a time of great strain in America; uncertainty abounds.  With uncertainty comes fear, and with fear comes withdrawal.  We can climb into our bunkers, each separately, and bar the door.  But, remember, millions of Americans don’t have a bunker to climb into – they have no place to hide.  For many of them, indeed, the crisis of economic security that we all dread now is no crisis at all – it is their status quo.  The Great Recession is just their normal life.“The rate of poverty in this country is rising. Over 100 million Americans – nearly one in every three of us – is in poverty or near-poverty today – 17 million of them children. I will tell you – state by state, community-by-community, and in the halls of Washington, itself – the security of the poor – their ability to find the health care they need, and the food, and the housing, and the jobs, and the schools – all of it, hangs by a thread.  The politics of poverty have never been power politics in America, for the simple reason that the poor don’t vote and the children don’t vote and the sickest among us don’t vote.  And, if those who do vote  do not assert firmly that Senator Humphrey was right, and if we do not insist on a government that passes the moral test – the thread will break, and shame on us if it does.
“The choice is stark: chop or improve.  If we permit chopping, I assure you that the chopping block will get very full – first with cuts to the most voiceless and poorest us, but, soon after, to more and more of us.  Fewer health insurance benefits, declining access, more out-of-pocket burdens, and growing delays.   If we don’t improve, the cynics win.
“On my last night in Washington, I visited the Lincoln Memorial again – standing at the same spot that I had stood at as a twelve-year-old boy 53 years ago.  The majesty was still there – the visage of Lincoln, the reach of the Washington Monument, the glow of the Capitol Dome.  It was still unbearably beautiful.  Still majestic.
“But, there was one change. Chiseled in the very stone where I was standing is now the name of Dr. Martin Luther King and the date – August 28, 1963, when he gave his immortal ‘I have a dream…’ speech.
“When I first stood at that spot, the Montgomery Bus Boycott was only three years in the past, and Dr. King’s speech lay five years in the future.  Rachel Carson’s book, ‘Silent Spring,’ was four years in the future.  And it would be six years before the phrase, ‘Women’s Liberation,’ would first be used in America.
“I thought, standing there, of something I once heard Dr. Joseph Juran say:  ‘The pace of change is majestic.’  And I mused about that majesty, and its nature.
“It occurred to me that the true majesty lay not just in the words – not just in the call – but also in the long and innumerable connections between the ideas that stir us – the dreams – and the millions and millions of tiny, local actions that are the change, at last.  A dream of civil rights becomes real only when one black child and one white child take one cooling drink from the same water  fountain or use the same bathroom or dine together before the movie they enjoy together.  An environmental movement becomes real only when one family places one recycle bin under one sink or turns off one unneeded light out of respect for an unborn generation.  Women’s rights are not real until one woman’s pay check stub reads the same as one man’s, and until my daughter really can be anything she wants to be.  The majesty is in the words, but the angel is in the details. 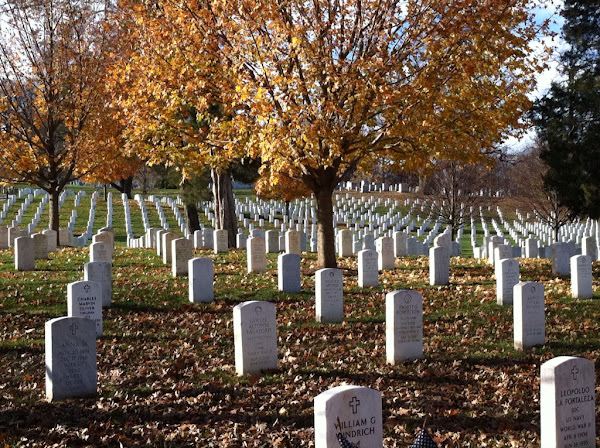 “And that is where you come in. Here is the lesson I bring you from 16 months in Washington, DC.  Your time has come.  You are on the cusp of history – you, not Washington, are the bridge between the dream and the reality – or else there will be no bridge.  Our quest – for health care that is just, safe, infinitely humane, and that takes only its fair share of our wealth – our quest may not be as magnificent as the quest for human rights or for a sustainable earth, but it is immensely worthy.  You stand, though you did not choose it, at the crossroads of momentous change – at the threshold of majesty.  And – frightened, fortunate, or both – you now have a chance to make what is possible real.”
Thank you, Dr. Berwick. May  it be so.